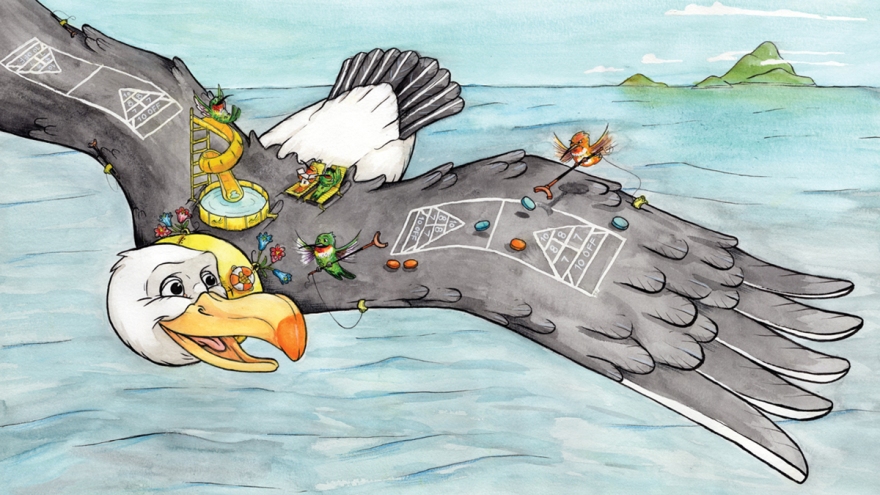 A couple weeks ago, I was all set to create a painting. I had thumbnailed the concept, rough sketched the idea out further, cut the 300 lb watercolor paper to size, taped it to my drawing board, and set aside the time to make it. And then I didn’t do it.

Part of being a creative person is learning when to bail on a project. You’ve thought up this amazing idea, artwork, or product. You may have even planned every step of the creative process. But then, for some reason, it becomes clear to you at the onset (or during the project) that it’s not the right thing to work on right now. The young artist (and I know I was like this) will try to shove that thought down and push forward, not wanting to have wasted the time spent prepping the project. This is a mistake. The mature artist listens to their intuition that one of the following realities is true.

This is when your situation or the world changes and you have no control over it. Case in point: the painting I was going to make a couple weeks ago. I actually wrote a bit about it in my last blog entry. It was for the SVS May illustration contest, and needed to address the topic of isolation. My idea was to show how it must feel, in a whimsical way, for an intelligent animal to live in a zoo. Surely, it must feel like being in solitary confinement in a prison cell. So I was going to have a chimpanzee relaxing in a tire swing, reading a book and eating bananas in an orange jumpsuit. There were going to be day tallies and chalk sketches of nature on the wall, coconuts turned into weights, and maybe even an escape rope made out of bed sheets stuffed in a corner. You know, just hitting some areas where life in a zoo and life in prison would overlap.

And I was excited to get starting. But then something major happened in the world a few days before I started the painting. A Minneapolis police officer murdered George Floyd, a black man, in the street, in broad daylight, on video. This proved to be the final straw in a long line of black men and women unjustly killed by the police or white vigilantes, and America exploded into protests for justice and reform.

After days of processing what had happened and what was growing and building into the larger Black Lives Matter movement in this country, it was clear to me that I couldn’t make the painting I had planned. There was no way that I felt it was appropriate to do anything touching on the criminal justice system, and I definitely didn’t want to give any racially charged person something to read into in my zoo analogy (specifically the chimpanzee character and the bananas, which racists have used to insult black men and women in the past). I didn’t want to unintentionally offend anyone in this time of pain, and I didn’t want any political message read into my work that I didn’t intend. So, I folded up my drawing board, and leaned it up against the wall.

Sometimes the world changes, and there isn’t anything you can do about it. Maybe you were about to launch a series of work concentrated on flames, and then all of Australia catches on fire. Maybe you were about to start a graphic novel about space ships and the crews that run them, and the Challenger explodes. Put your pencil down. This is not a failure, but an opportunity to prioritize reflection, education, and finding out how you can help or change what is happening around you.

These are the circumstances that are tied specifically to turmoil or major change in your life, both positive and negative. Relationship struggles, the birth or adoption of a child, the start or loss of a job, a move, a divorce, your child’s behavioral issues, or a family emergency are all massive shifts in your life, and when you’re shifting is not the time to work on a major project. Mental health issues like depression, anxiety, and loneliness shouldn’t be ignored so you can force out your big dream. They need to be addressed, and your art can wait while you take care of yourself and your loved ones. When you’re in a better place you will be so much stronger and better equipped to do the things you love.

Sometimes, the issue really is the project, but not because it’s a bad idea. Maybe it’s TOO good. Maybe it’s too big and complicated for your level of experience or the amount of time you can commit right now. In that case, try working on something similar but smaller. Instead of a graphic novel, illustrate the first few pages as a standalone short comic. Instead of a huge landscape painting, paint a series of 4-hour studies. Or maybe, the project is too small for you. Maybe you’re at the point in your career that doing online art challenges is taking you away from your life’s work. Maybe it’s time for you to sacrifice the immediate for the long lasting. Take a step back, think hard, and make a list of your goals, then plan where you want to be in 6 months, a year, and 5 years. Does this project fit in that plan or get you closer to your goals? If yes; great! If no; bail.

But I’ve got some great news:

Saying no today doesn’t mean saying no for the rest of time, and just because a project is right right now doesn’t mean that it won’t be right when the world, your life, or your experience changes. My painting “Cruise” was originally supposed to be for a contest in January 2019; I ended up painting it for Slowvember in November of that year. My painting “Treat Yourself” was planned for February 2019 before it got shelved; it was painted as an entry in a fundraiser for a local art gallery one year later. Even now, for my zoo/prison painting, I have plans to bring it back in the future. My kids have smartly suggested that I include an orangutan so that there’s an extra character and give the animals old-timey black and white striped outfits, and I can’t wait until the time is right to pain it.

When you need to bail on a project, write it down and set it aside, so you don’t have to worry about it anymore. I keep a notebook where I write down the illustration and painting ideas that I can’t get to so I can return to them when I have an opening in my schedule. Some ideas even end up on scraps of paper that I put in my “Idea Debt Jar.” If things get slow at work, I can always pull out an art idea at random to work on. Whether you like the notebook, the idea jar, a google doc, or stone tablets, the point is to remove the weight and guilt of dreams defered from your mind. You need that creative energy and mental space for the right project for right now, and that right project might be the wrong project yesterday, last month, or last year.